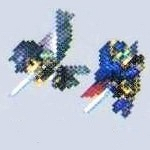 Just a student that probably has a little too much time on her hands. Love the SaGa series, but I don't mind a little mindless fun from time to time. 戦国BASARA, Devil May Cry, Bayonetta and Touhou/eXceed tend to fill that void. Love Fire Emblem for some RNG+tactical fun. Also quite fond of shooting things for stress relief, virtual and IRL. Archer in training, though I tend to spend more time tuning or repairing than shooting~

SOIAO and X360 runs are on hold until I get more time/feel motivated to play. Looking for rares again in the SOIAO run. Currently hanging around the provinces of Skyrim and Cyrodiil, while popping into Iris/Warm from time to time. Currently going through Lunatic and recording growths. Also being thoroughly distracted by all the shiny guns in Borderlands... and being a sneaky little thief/assassin.

High res scans are done, along with map scans. May redo character scans as colour looks a little off.

This is for me to keep track of what types of runs I've done so far.

Any run with Unique Leaders may be trainer-assisted to give them their Skills and Focuses as early as possible. I don't like being bothered at various BR levels. Will probably be very slow. This may or may not put me at a disadvantage (dependent on unit). On one hand I get what I want. On the other, I may have to train more Skills than a normal run, especially Lotions users. This can potentially screw up class progression if I'm not careful. I will state if the run is trainer-assisted (there's usually going to be some sort of poking around while I'm at it).

The National Runs are Generic Only. I will state if it's a trainer-assisted run as some National runs may not feasible without hacking in units. Same goes for the Emblem runs.

I've probably done a few more, but don't actually remember what I've done during the game. I've repeated Soldier Only a few times as well, improving each run by a few BR.

I wonder how many of these are feasible on the X360...? Other than the obvious.

JP Guide and Other StuffEdit

Was working on a little something from a while ago. Constructed a table of possible ending classes for both the PC and X360 versions. Can be found here (PC) and here (X360). Both of them still require a lot of tweaking, so I'll get on that. X360 getto, so let's see if my reasoning holds...

Also went through the JP as thoroughly as possible, extracting little bits of info, supplementing it with experiences, PC differences and the other JP guide. Nothing was taken from the EN guide, mostly because it's a piece of crap. It's funny how it outright states certain things, and yet remains mum on certain subjects. Funny little thing. It's still a WIP because I haven't gone through the trivia, columns, etc., and proofreading it a bit more thoroughly.
Chapter 1
Chapter 2 Part 1
Chapter 2 Part 2
Chapter 4
Chapter 3 was omitted because it was the main walkthrough. I may scan the maps because they point on where all the rares will spawn. It's a clearer picture than the maps here, and some people (like me) don't like reading coordinates. There's also the quest page, which gives a path of how to navigate certain quests.

The data is based off of the Official Complete Guide published by Square-Enix.

Retrieved from "https://lastremnant.fandom.com/wiki/User:Zephyr135?oldid=100436"
Community content is available under CC-BY-SA unless otherwise noted.